We all have secrets. Some secrets, we choose to bury deep within us because although it’s fun to share every snippet of our lives with others, there are still things that we want to be selfish about and these we keep to ourselves. Some secrets we share to a small group of people who we consider as family. Some secrets are only secrets at present, revealed one, two, three or more years later.

There are secrets behind the dresses I’m wearing in this post and since I’m feeling a little generous today, I’m sharing them with you.

If the skirt looks familiar, it’s because I used it for this post.  I bought the dress for a formal event last year from the department store. I’m not really into designer dresses and I had no plans of spending thousands on a dress that I’ll only be able to wear twice or thrice a year so I chose a simple dress that can be worn on any occasion with a few tweaks here and there. This dress originally had a black lace skirt that dropped five inches above my knee. Since I was going to a formal event, I decided to make the dress look more elegant by attaching the shawl that I used for my third year prom and making it look like it’s originally part of the dress. Inside the dress are more or less fifty safety pins securing the shawl to the dress. This is secret number one.

The skirt is part of the gown I wore for my third year prom. This is secret number two. I guess when you own something that you invested on not only financially but also emotionally, you’d want to keep on using it to make the most out of it. It’s like holding on to a jar that releases happy memories whenever opened. This gown has so much meaning and I’ve become attached to it that I use it whenever I have the chance. This was the gown that I wore during my 18th birthday celebration, and many other formal occasions that I attended in the past.

I’m sure by now you’re wondering what the gown looks like so here goes: 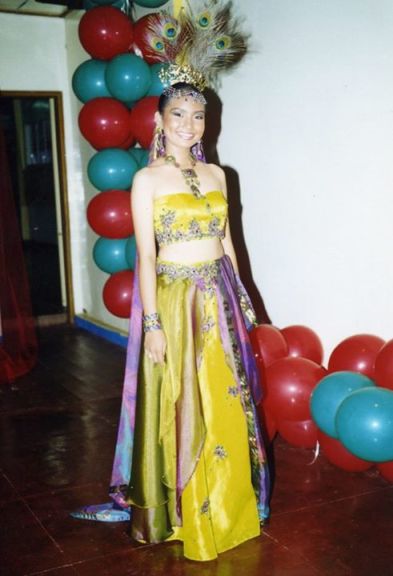 Special shoutout to Adele for asking me to pose for her and for being very patient with me. She did a wonderful job. I had a great time. 🙂